Do you know that Paella is regarded as the Spanish national dish? And do you know how good it is?

I first had the rice based wonder when I was visiting a friend in Valencia back in 2007 (on that road trip I speak about in the book). We ate the seafood version perched by the seaside with a glass of Sangria and I was hooked.

Once back in France, I found the dish at certain Spanish flavored restaurants, but nothing was as perfect as the one I had tasted in Valencia. In southern parts of France, in particular places like Sainte-Marie-de-la-Mer on the natural reserve called Camargue, we are overwhelmed with restaurants offering enormous wok-like pans of Paella to the passing tourist. Saffron rice, fried chicken thighs, shrimps, calamari, mussels… it’s delicious, although I never have been able to replicate that first experience.

This past summer I found myself at the seaside once more – this time at the Ile de Ré – with a sudden urge to make Paella. Seafood Paella, like the one I ate in Valencia those many years ago. I scoured my cookbooks (and the internet) to find an authentic recipe and spent one dazzling Spanish-themed evening chopping, sautéing, mixing, tasting with Francis Cabrel in the background singing La Corrida.

Although we were only four, we made enough for an army (probably for 15 or so, easy). And since we don’t have a paella pan, we had to use two large frying pans. Paella can get away from you!

It’s a perfect idea for a large dinner party, festive and fun. And you can make it in advance. But be careful – it takes a lot longer to make than you think. All the recipes said 1 hour total and it took us 2! 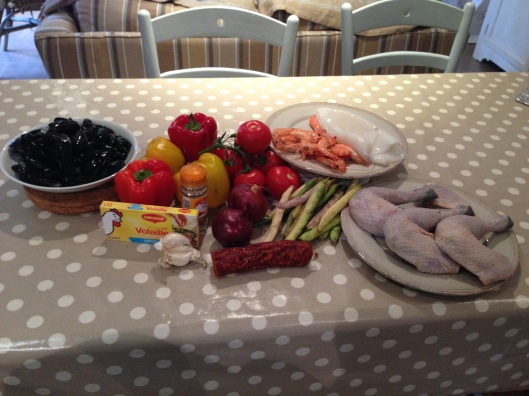 You’ll also need a very large paella pan or two large frying pans (we had to divide ours into two pans in the middle – this is a large, large dish).

Prepare the ingredients in advance. Briefly boil and peel your tomatoes. Wash the mussels twice at least. Cut fish and calamari into pieces. Crush your garlic. Cut your veggies into strips. 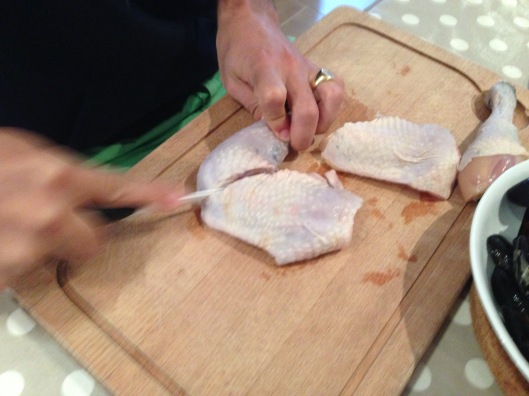 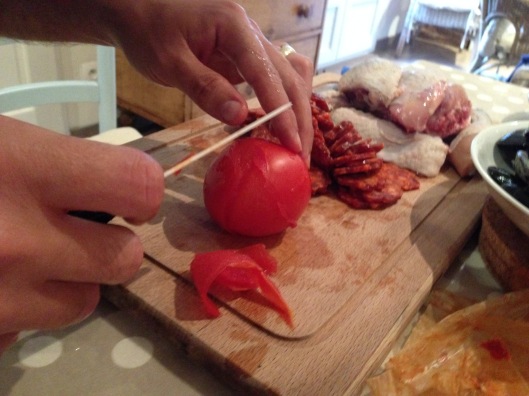 With a bit of oil in the pan on medium heat brown your chicken on all sides.

If you have a big enough pan, push the chicken to the sides where it won’t cook anymore and add the calamari, fish and beans. Let cook in the chicken oil until calamari is browned. Stir/flip frequently. (If you don’t have a giant pan, use two.) 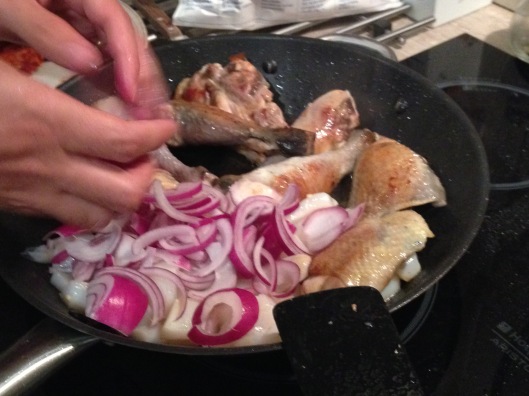 Add rice, chorizo and cover with bouillon. Cover and let cook for 10 minutes on medium heat. Add bouillon as needed so that the rice cooks well and nothing sticks to the pan. 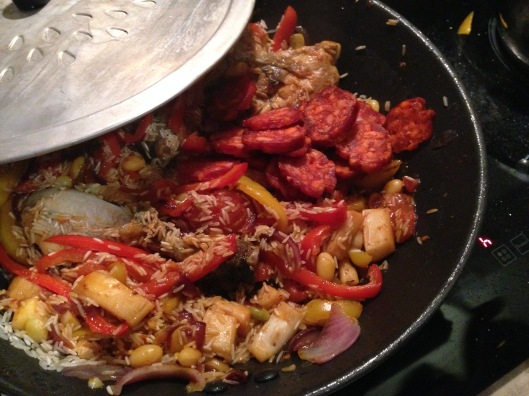 Add mussels and shrimps. Let cook on medium heat for another 10 minutes or until the mussels are all open (throw out any mussel that does not open with the rest) and the shrimp are pink.

Taste: once the rice is cooked, the mussels open, shrimp pink, it’s ready!

4 thoughts on “A Spanish Tradition – A Rave in France”