His later paintings are now classic Americana to a modern eye. Some might call him the epitome of realism in mid-20th century art. Others, like me, might not immediately conjure any images at all in our mind’s eye when hearing his name. But that doesn’t much matter. As soon as we set eyes on Edward Hopper’s work we understand that he belongs with the titans of American art alongside such names as Rockwell and Warhol, for his oeurve is as imprinted on our collective consciousness as “Teacher’s Birthday”  or “Campbell’s Soup Cans”. 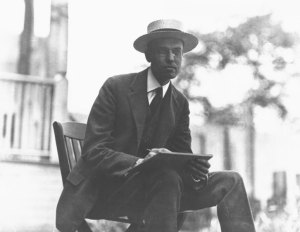 Born in 1882, Hopper was a contemporary of the birth and growth of such artistic movements as cubism and abstraction, formalism and realism. But he remained throughout his life something of a contrarian when it came to such titles and the rules they tend to bring along with them. A student of the New York School of Illustration and the New York School of Art, he came to Paris several times in the early 1900s where he was heavily influenced by Manet et Degas and the Flemish Golden Age painters. During this time, he painted his first Parisian canvas, “Bridge in Paris”, in 1908. Another of his most famous French-inspired pieces is “Soir Bleu”, painted on a further visit to Paris in 1914.

Emerging into the limelight of major success and recognition in the 1930s with creations such as “Nighthawks”, “Morning Sun”, “Gas”, “Hotel Room” and “Sheridan Theatre” – his masterpieces – Hopper has been credited with influencing and motivating an entire generation of artists.

“Nighthawks” reportedly inspired Hemingway, another long-time lover of Paris, to write his novel by the same name. Hitchcock used “House by the Railroad” as a model for this film Psycho. And “Gas”, a painting of a lone man standing at the apex of the natural old world and the brave new world of technological development, has become emblematic of the American Dream.

His paintings are characteristic of a certain sadness, a bleakness, a solitude that penetrates their viewer’s soul.  There’s a melancholy present in his work, running the length of his creative gift to the world, one that ended with his “Two Comedians” painted in 1966, two months before he died.

Now on exhibition at the Grand Palais in Paris, a beautiful and large domed building constructed in 1897 in preparation for the 1900 Universal Exhibition, Hopper’s iconic art continues to bask in French enthusiasm. Described in the Figaro Magazine as “the hand responsible for a disappearing world reduced to nothing but itself,” the French love affair with Edward Hooper’s art is as poignant as was the cultural influence the country had on the early years of his craft: “He paints what he has in front of his eyes – civilization, individualism, consumerism – in a world where the individual is deprived of all history, all interaction, his subjects together in the world but ultimately completely alone.”

For those of you in Paris or coming to Paris for the holidays, the exhibit opened last week on October 12 and will be showing until January 28 at the Grand Palais. 12€, regular entry. Like most of the big museums in Paris, the Grand Palais is closed on Tuesdays. For more information, to buy tickets or book online, check out the Grand Palais site in English.

And when you’re there, don’t forget to look up at the wonderful Beaux-Art architecture of the Grand Palais itself.