The family wedding I attended this past weekend was quite an event. Taking place in the northern part of France near Rouen in Normandy, the weather was sensational on Saturday for the bride and groom’s big day. Those of you who have followed my preparations for this event will know that I was a little nervous about how it was all going to turn out. This was, after all, the first wedding I was to attend having taken the very French (European) step of wearing a chapeau de cérémonie.

Weddings in France are not quite the same as weddings in North America. And the differences reach farther astride than the wearing of large frilly hats. For starters, when the father of the bride walks his daughter down the aisle the priest does not ask “Who gives this woman away?” – I suppose it’s obvious that particular responsibility falls on the shoulders of the man standing to her left. Nor is any mention made of objections to the marriage later on in the service.

At the end of the ceremony, the French do not kiss in the church like we do. They kiss outside on the church steps instead. And the wedding party is made up of les 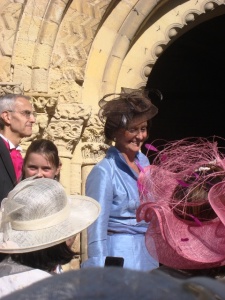 petites filles d’honneur (something akin to our flower girls) and little page boys who follow the bride down the aisle holding her gown. Groomsmen and bridesmaids are an  Anglo-Saxon invention.

After the ceremony this past Saturday, the guests gathered for a cocktail in the delightfully fresh Normand air, sipping on champagne and nibbling petit fours while the bride and groom were busy taking photos. When dinner was announced, we proceeded to take our places to delve into a four course meal: scallops with a white wine reduction served with a chilled glass of white wine to match, followed by a braised chicken with red wine, then the cheese selection with another glass of red wine, and finally a platter of small bite-size desserts served with a refreshing glass of champagne.

The bride and groom did not “cut the cake” for the French don’t have tiered white wedding creations as we so often do in the American tradition. The newlyweds’ first dance was a waltz, as is French custom, begun by the father of the bride and his daughter before he passes her to the expecting arms of her new 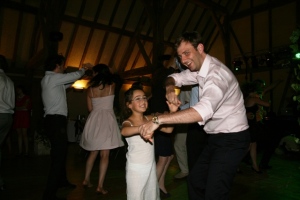 My entire belle-famille is all a bunch of swing dancers. I’m not sure where the tradition started, but it’s such fun to watch them twirl their way around the dance floor after the waltzes have sped up into 1950s and 60s rhythm and blues. This family tradition looks in no way in danger of extension as the older generations show the newest members the way around a dance floor. 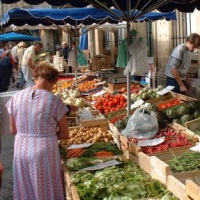