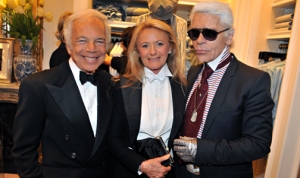 Over my recuperation period down south, I had an abundance of time to foster blog ideas, review niche stores, test and film recipe ideas, and clip restaurant reviews. 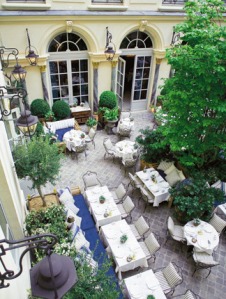 So today I have a wonderful new restaurant recommendation for you: Ralph Lauren’s latest restaurant on Paris’ Left Bank in the heart of Saint-Germain-des-Prés.

Yesterday, I treated myself to the experience. And, boy, what an experience it was.

Nestled in the courtyard of a 17th century hôtel particulier built during the reign of Louis XIV on the corner of rue du Dragon and Boulevard Saint-Germain, Ralph Lauren’s newest store in France (2010) is also host to his restaurant appropriately named Ralph’s or Le Ralph’s in French. The perfect spot for a drink or a meal, this Long Island inspired restaurant is a taste of fresh Eastern Seaboard air right here in the City of Lights.

Nautical themed in blue and white strips with comfy over-stuffed cushions and wrought-iron furniture, the courtyard decor is more American seaside than Parisian bistro. The food too brings us a flavor of home. (It even made me a little homesick.) Featuring such North Eastern American delicacies as crab cakes, chicken Caesar salad, a lobster salad sandwich and blueberry cheesecake, not to mention the 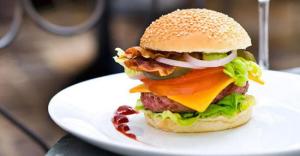 piled-high Ralph burger, North Americans will feel a charming sense of home as they bask in the perfection of this typically Parisian setting.

Slightly pricey, as we could expect from a world-famous fashion designer turned restaurateur, if your budget is modest, then Ralph’s is a great place for an aperitif around 7pm.

Interestingly, this is not Lauren’s first venture into the restaurant business. I was surprised to learn that he already had a café in Chicago, also named Ralph’s. In both restaurants, the Black Angus beef is flown in from his range in Colorado! Talk about having a hand in the whole process.